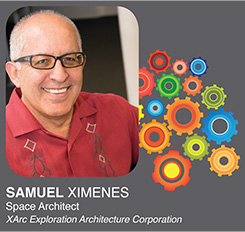 Samuel Ximenes is an aerospace professional and space architect. He is the founder and managing partner of XArc Exploration Architecture Corporation. His experience includes an inclusive knowledge of space architecture and systems engineering principles and practices involved in the definition, design, development,integration, test, manufacturing, and operations of large-scale aerospace systems.

He has worked for Grumman Aerospace Corporation leading design integration efforts of the Japanese and European laboratory modules for NASA’s Space Station program. He has held executive management positions at Lockheed Martin, L-3 Communications, and Futron Corporation. He is a consultant for The Aerospace Corporation providing business development services for space exploration and technology markets.

Journey to the center of the moon

It is human destiny to become a multi-planet species. The space frontier is opening up to private citizens and interplanetary entrepreneurs are redefining the business of space Private commercial companies are leading the way going back to the moon, and not just the moon, to asteroids to mine their resources, and to Mars, the “holy grail” for human habitation on a distant world. Private companies have already announced plans to explore and exploit the solar system.

One destination is to a place on the moon called the Marius Hills Skylight, a recently discovered large deep pit or hole in the lunar surface. It was formed from a lava tube ceiling collapse, and is the entrance to a lunar lava tube cave. Mineral resources around the area have been postulated for mining operations and the potential for long-term habitation and settlement within the protection of the lava tube are the basis for economic development of the site. LEAP2 is a multi-generational phased approach for developing this site beginning with robotic reconnaissance, then eventually humans exploring the cave for site assessments; an outpost construction/mining phase, and finally the settlement phase. Citizen explorers can participate at every step of the way.