Set Design with a Purpose

TEDxSanAntonio 2012 speakers stood proud in front of a stunning, innovative set design. And there’s an interesting story behind it. 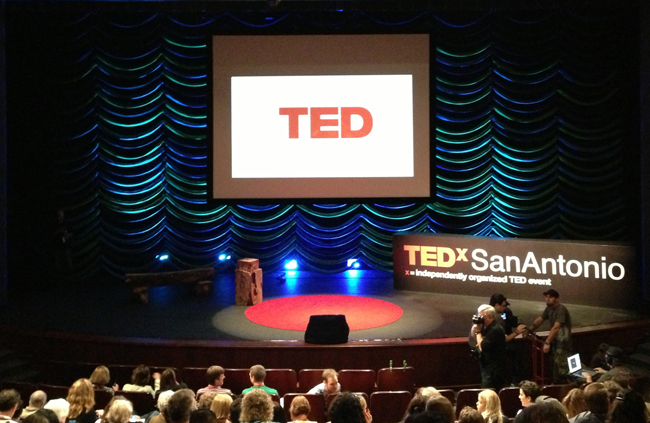 Lake Flato Architects are TED and TEDx fans, and they volunteered to design the set for the 2012 event. The design was not only a visually impressive backdrop, but, like Lake Flato architecture projects, is creative in meaningful, purposeful ways. The firm excels at sustainable building practices, and one of the team’s first goals was not to create anything throwaway.

Vicki Yuan and Grace Boudewyns spearheaded the project. “We worked with local groups Lighthouse for the Blind, Haven for Hope, and TEDxSanAntonio to create a backdrop that was memorable and, more importantly, useful after its life on the stage,” team member Ashley Heeren explained. “We decided to use blankets, which are in high demand at Haven and which were ordered from Lighthouse after our fundraising effort.”

“The San Antonio Lighthouse for the Blind (SALB) believes in giving back to the San Antonio community that so generously supports them,” said Nancy Lipton, Director of Public Relations. “When Lake/Flato Architects asked the SALB to make blankets for an event backdrop that ultimately would be donated to Haven for Hope, our answer was a resounding yes. Last winter the SALB made “Hoodies for Hope” jackets for Haven for their homeless population.”

Using zip ties and cord, Lake/Flato employees and volunteers rolled and arranged the blankets in a pattern that represented an important statistic: as of January 2011, Haven for Hope had provided shelter for 76% of San Antonio’s downtown homeless population (represented by the brightly colored blankets). 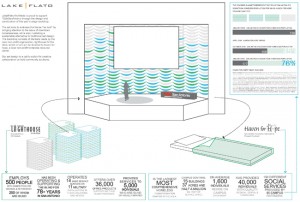 After set strike, the blankets were delivered to Haven for Hope. “Prospect Courtyard at Haven for Hope always has a demand for blankets,” said Ed Coleman, Director of Prospects Courtyard “The donations that we received as part of this unique production were very much appreciated and quickly put to good use.”

About the Author
TEDxSanAntonio's current licensee, Firecat Studio's founder and CEO Susan Price is an internationally recognized user-centered design and communication technologies expert with 20 years in the multimedia industry, both print and web. A big promoter of collaboration, Susan sponsors free monthly coworking and workshop lunch sessions at Firecat Studio, every first Friday of the month.
Social Share
One Comment

What's New With You

Ways to Stay Healthy During A Crisis