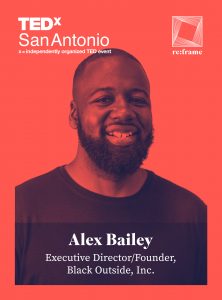 Most TEDxSanAntonio speakers decide to apply on their own, whereas a few are encouraged to apply because someone else that they know (boss, coworker, friend) is aware of some awesome thing that they do and basically tells them “You totally HAVE to share this with the TED audience. Alex Bailey’s experience was kinda like that.

So although he had some initial trepidation, Alex went ahead and applied back in the summer. As events transpired, he didn’t learn about his acceptance until three weeks after the fact, because he was hiking in the Sawtooth Mountains of Idaho while all of his fellow speakers were learning of their acceptance. He only received the good news once he was back in the bosom of civilization. So what is this compelling topic that so moved Alex’s friends to push him to apply?

“As the leader of a non-profit that serves youth of color, I’m passionate about expanding the outdoors to more youth. I’m struck by the lack of diversity in the outdoors, but given our historical relationship to the outdoors, it makes sense. My hope is to provide a framework for how we can reengage more diverse communities in the outdoors by first digging into our collective histories—both the pain and power.”

After spending three years as a summer overnight camp counselor, seven years as an educator, and now leader for one of the only youth-centered outdoor programs led by people of color, Alex is excited to share his experiences and observations with the TEDxSanAntonio audience. But is he concerned about the prospect of standing on the stage in front of hundreds of people?

“I come from a family of ministers and my hope is to channel their engaging presence and energy into my talk. Having grown up in the Black church, I’m used to more call and response from the audience and authentic engagement over scripted speeches. This will be my first memorized speech, which will force me to reflect and internalize points of inflection and portions where I want to draw in the audience’s attention.”

Speaking from the Red Dot and keeping within the strictures of the TED format can be a daunting challenge. Does it bother Alex? Not so much.

“I love the format and the practice sessions leading up to it, having an opportunity to hear the other amazing speakers. Time is always an issue, as I envisioned it would be. But I feel honored to share the powerful story of my grandparent’s experience in the outdoors, both the painful and triumphant, to hopefully engage more communities of color in the outdoors.”