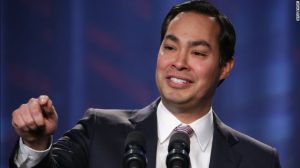 2010 was the inaugural year for TEDxSanAntonio and one of our speakers that year was San Antonio mayor Julian Castro. He spoke passionately about the role of education in his own life and as a mechanism for advancing the status of the Alamo City.

Julian’s mother Maria del Rosario was an activist for Hispanic causes and he recalls being dragged with his brother Joaquin to events and rallies.

“Rallies were the last place that a ten-year-old wants to be. No one cared about our opinions. We were basically just furniture,” he noted during his remarks back in 2010.

And so the young Julian did not even begin thinking about a possible role in politics until he showed up at Stanford University in 1992. He graduated with a Bachelors degree in Political Science in 1996 and went on to graduate from Harvard Law School in 2000.

Since graduating from law school, Julian’s trajectory has been an endless series of achievements that culminated in his election to San Antonio City Council (D7) in 2001 and then to the mayor’s office in 2009. He went on to serve as mayor for three terms, during which tenure he delivered the keynote speech at the 2012 Democratic National Convention. In 2014, Julian joined the Obama administration as Secretary of Housing and Urban Development (HUD).

In 2017 Julian joined the LBJ School of Public Affairs at UT Austin. And then, on January 12, 2019, he announced his candidacy for the 2020 presidential election. And so the journey continues for one of TEDxSanAntonio’s earliest speakers and one of San Antonio’s favorite sons.

And, because you’ve probably always wondered, Julian is one minute older than his identical twin brother Joaquin.