Lisa Phillips – From Speaker to Coach 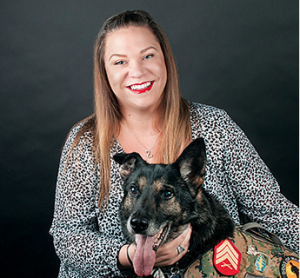 Former TEDxSanAntonio speakers frequently look for additional ways to give back to the San Antonio community, and one common way is by serving as mentors and coaches for subsequent speakers. One such case is Lisa Phillips, whose 2016 talk on Military Working Dogs was one of the highlights of that year’s program. Now, three years on, Lisa has accepted the challenge of serving as coach and curator for one of this fall’s speakers, Kierra Adelman (who we’ll introduce in a forthcoming blog post).

Although Lisa’s major in college was performing arts, she still vividly recalls coming close to having her talk pulled from the program because of recurring difficulties in getting it just right.

“This day is going to be one of the most important days of my life other than getting married or having a child,” she thought at the time. “It’s a great honor and I can get it right. I know I can.”

And she certainly did, as you can see by checking out her talk at the link below. As though preparing and rehearsing for a TEDx talk is itself not daunting enough, Lisa’s was made a bit more challenging by having a live working dog—Rambo—on stage with her throughout the ten-minute presentation.

“It was a very emotional process,” she recalls. “And getting it down to ten minutes was pretty tough as well.”

So how has being a TEDxSanAntonio speaker changed her life since? Her story has been featured in the Tricentennial Issue of SA Magazine, and her former Northeast Lakeview College professors use her talk in their classes. In fact, her experiences with military working dogs began as part of an essay she wrote back in 2011 while attending classes. Also, since her talk, Lisa has been integrally involved in drafting legislation governing the handling and treatment of working dogs across the country, and she will be speaking to two government classes at UTSA on October 15th about her post-TEDxSanAntonio journey.

As curator and coach for first-time speaker Kierra Adelman, Lisa is now in a position to reflect on her own experience and to codify, as best she can, the lessons of her own experience. Some of her key tips for success:

“I don’t want to let Kierra down,” Lisa says, “I want her to always feel supported, that I have her back.”