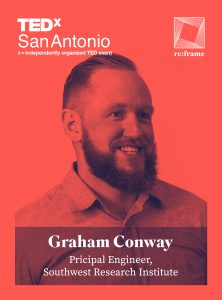 As a Principal Engineer with Southwest Research Institute (SWRI), Graham Conway knows whereof he speaks when it comes to automotive matters—engines in particular. And when it comes to automotive engines, the most widely debated topic in recent years has been the impact of electric propulsion versus the gasoline engine that we’ve all relied on for the past hundred or so years. When presented with the chance to talk to the TEDxSanAntonio crowd about this question, and, specifically, whether or not the evolution to electric vehicles is truly in the interest of the planet, Graham jumped at the chance.

“I wanted to send a message to the widest possible audience that our current thinking on how to improve the planet for future generations is inherently flawed. The industry is moving in the wrong direction and we will pay for it in the future.”

But that initial notification call didn’t go quite as planned:

“I misheard Ali say he ‘was calling from FedEx’, and my mind raced as to what I had ordered and forgotten about. I was quite dismissive, assuming it was a spam call, and wanted it to end. Ali was understandably shocked when I told him I had no idea what he was talking about. It took a good thirty seconds to a minute to finally understand that he was actually from TEDx … at which point I instantly remembered I had applied and was overjoyed.”

Communication difficulties aside, once Graham began seriously pondering the structure and content of his talk, the potential impact of it quickly became apparent.

“The subject matter is important to me because I think, as an industry, we are being pressured into looking at technologies which may not be the best answer for right now. I think the audience will be a little baffled at the thought electric vehicles may not be the right answer, right now.”

As a consultant to car companies and parts suppliers, Graham is uniquely qualified to offer his views on this important topic, though he concedes that it will be tough, given his engineering background, to get through it all without showing any technical diagrams.

“The key for me is to not turn this into one of my usual engineering presentations. Ideally I don’t want to show a single graph at all … but I’m not sure if I’m capable of that. Trying to condense complicated and abstract engineering/science problems into a relatable delivery is without question my greatest challenge.”

Anytime we challenge conventional thinking (e.g., electric cars are cleaner than gasoline-powered ones), there is a risk of pushback. But it’s a challenge Graham is looking forward to.

“I’d like the audience to know that this talk will reveal some concepts they may not accept or feel comfortable with, but that by the end of the talk they may question their current understanding and assumptions.”