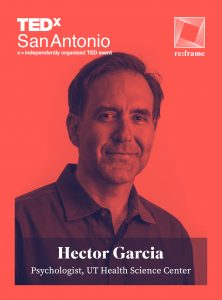 There are few topics one could speak about from the TEDxSanAntonio stage that are more fraught than war—its causes, its solutions, and its effects on humankind. But Hector Garcia is prepared to give it a go, focusing his remarks on the root causes of war, both historically and in the present day. A long-time admirer of TED talks, Hector was honored to be given an opportunity to speak from the TEDxSanAntonio stage in November.

“I’ll be talking about the origins of war. For the sheer magnitude of human suffering wrought by war, we owe humanity the clearest lenses we can muster in our efforts to create a more peaceable world. The evolutionary sciences provide a stunningly clear, honest, and undeniable mirror to our most ancient impulses. Often those who read in this field arrive at profound self-understanding. Sometimes the insights can be disturbing. But by understanding our instincts we are more, not less, able to resist those that no longer serve us. I suspect my audience will experience all of this.”

But this will not be a talk about war in some abstract sense. Rather, Hector, a psychologist with the UTSA Health Science Center, will focus on the very real human aspects of mankind’s incessant tendency toward conflict.

“I’m a scholar of war studies, and the author of two books delving into the evolutionary psychology and biology of war and other kinds of violence. I’m a clinical psychologist who has spent his entire career working with combat veterans. I care deeply about human suffering.”

Hector says he really loves the TEDxSanAntonio format and is focused now on simply preparing and delivering an impactful overview of mankind’s most destructive instinct.