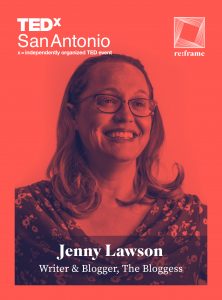 People talk a lot about getting out of their “comfort zones,” but few would take it to such extreme lengths as applying to speak at a TEDxSanAntonio conference in front of hundreds of people. When she received word she’d been accepted, Jenny Lawson had some initial second thoughts.

“I was asked to apply and I thought it sounded like something that would push me out of my comfort zone. When I heard I’d been chosen, I felt nauseous.  Then excited.  Then nauseous again.  That’s sort of been repeating itself every day since then.”

Jenny will talk about mental illness and the ways in which it has affected her life and that of other family members. It’s a difficult topic, to put it mildly, but an important one as well.

“I’ve dealt with mental illness my whole life and I’ve found that there’s something about confronting the monster that makes it smaller and easier to deal with.  I think that most people will either deal with mental illness or will love someone who deals with it, so unfortunately I think it’s more relatable than it would be in a perfect world.”

Speaking in front of a large group presents daunting challenges for anyone, but especially someone who has spent a good part of her life avoiding it.

“I have really severe anxiety disorder so this isn’t easy.  I’m good at writing because I’m so bad at speaking. I developed one because the other was so underdeveloped, which makes this strange territory for me. The moment before I walk out on stage is always the worst because I’m always half afraid I’ll be paralyzed and unable to move.  It’s never actually happened but it’s a permanent nightmare. I’m considering having the whole thing tattooed on my arm in case my mind goes blank.”

And so, despite some personal misgivings, Jenny knows too well the toll that mental illness can have on families (particularly when it goes unacknowledged and/or untreated). She is looking forward to sharing her deeply personal experiences with the goal of casting a bit more light on this important topic.

“I asked for a ten-minute space because I figured I’d do six minutes and maybe go over.  Turns out my talk is clocking in right at ten minutes.  I guess I had more to say than I thought I did.”