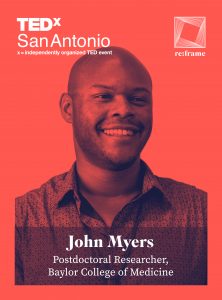 “Your brain is as amazing as the galaxy you live in.”

So that’s a pretty grandiose-sounding assessment of the main theme of John Myers’ upcoming TEDxSanAntonio talk. But John definitely embraces the opportunity to share with the audience his perspectives on the inner workings of the human brain, and he has the research and academic background to know whereof he speaks. He’s a cognitive neuroscientist who has spent years studying human brain activity during perception, memory, speech, and cognitive control. He has an intimate knowledge of how the brain works, and he’s passionate about sharing his insights with the rest of the world.

“I think that understating more about the brain is critical for the future of our society. We need to have better working knowledge of how the brain works and how it connects us to everything, including each other. I believe the TEDxSanAntonio audience will relate to this content because I will be discussing their brains and stimulating them with sound. People usually have an inherent interest in learning how their brain works, but they tend to stop short the moment they see that biology and math are involved.”

As is so often the case with TED speakers, the greatest challenge will be compressing so much information into such a brief talk.

“It is somewhat difficult to water down the details of the brain’s physiology but still preserve the truth about how it works. Time constraints can be an issue when we have big ideas, but attention spans are also rather short. People only give you their full attention for brief moments before they tune into their inner thoughts. The goal is to keep them coming back by making the content more relevant to them at a personal level.”

“People learn best when they can relate themselves to the topic,” John says. And what could be more relevant than a close look inside the human mind? After all, much has been written about the vast network that comprises the human brain. What better way to address the topic than through the immense network of the TED audience?

“The opportunity to spread knowledge about the brain through TED’s massive network is amazing.”