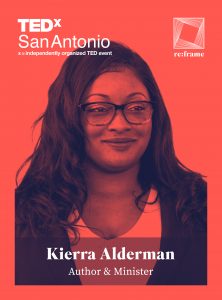 When Kierra Alderman first learned that she had been selected by the TEDxSanAntonio programming committee to be one of this year’s speakers, she was in the middle of dinner at Longhorn Café.

“I had to step outside the restaurant so I could hear the caller. I immediately had to sit down to take in the news. I walked back in the restaurant clapping and yelling ‘Thank you Lord,’ and immediately my family knew that I had received good news.”

Kierra Alderman is a minister who will speak on the changing role of women as members of clergy in various religious denominations, a topic she feels especially passionate about, particularly following her own experience of being turned down for a lead pastor role at her former church.

“It’s a subject that’s important to me because it affects so many other women beyond just myself. It deals with women, ministry, leadership, inequality, and humanity as a whole. I felt it was important to discuss this subject because I wasn’t hearing anyone else talking about it publicly. Last year I was Associate Pastor at a church where the pastor passed away. I was supposed to take over his role, but instead they chose to retire the church saying ‘We aren’t ready to have a church led by a woman.’”

Kierra has served in ministry for five years and has written two books, including one—Bread of Life—that sheds light on this important subject. But what’s it like for this experienced speaker to take to the TEDxSanAntonio stage?

“I feel as though I’m in new territory. I am used to publicly testifying and sharing experiences versus memorizing a regimented speech. I am also used to building off the audience and tailoring my message based off them, so this process is really teaching me a lot. I am currently a preacher, so I’m comfortable with public speaking, but I have never had to do such a structured talk or even a speech that I needed to memorize. I am used to being able to draw the audience in over time. I have also never had to relay my topic in such a short amount of time, so it has challenged me to really concentrate on the core information.”

Any general thoughts she’d like the audience to know about prior to her talk?

“That I was only able to get to this place by experiencing bias and discrimination. Sometimes the hardships you experience in your life work together for your good, to prepare you and elevate you in ways you never could have imagined.”

Kierra’s coach for her forthcoming talk will be Lisa Phillips (a former TEDxSanAntonio speaker profiled in last week’s blog piece). The pair are already strategizing about how to create a memorable and impactful talk.

“I don’t want to let her down,” Lisa says. “My goal is to make her feel that she’s always supported, that I have her back.”