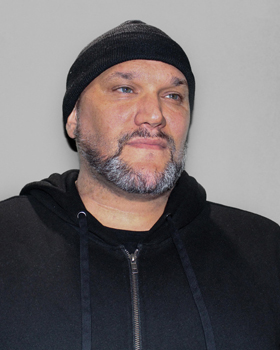 For San Antonio native DJ Boskind, AKA Question, his goal for everything he pursues is driven by one mantra “make a dent in the universe”. Rapper/ engineer/ producer/ ghost writer, Question graduated from the prestigious Los Angeles recording school, and his first “job” in the music industry was working for Grammy award winning singer/songwriter Raphael Saddiq, and later spent years working as an artist with platinum producer JR Rotem and Zach Katz (who later became the head of BMG MUSIC, and is now the CEO of Raised In Space) before eventually signing with Cinematic Music Group. All experiences that prepared him for a future as a music executive.

After becoming the first hip hop artist from San Antonio to sign a major record deal with Epic/Sony records and creating friendships with the likes of Nipsey Hussle and industry veteran Jonny Shipes. Late last year, Question decided to step away from the mic and focus on developing talent by launching his own management company ARTOFFICIAL, and helped build an incredible one of a kind, state of the art recording facility affectionately known as the BOOMBOX, in partnership with Davies Entertainment.

“The ideas and inspiration that come from the TEDx Stage have always moved me to pursue more as a creative. Being a part of that now as a curator is one of those rare life opportunities I still can’t believe is happening. I can’t wait to be a part of the process.”

San Antonio Sound Garden is the #1 Co-working space for music in SA. We are creating a sustainable music economy by igniting industry, building community and highlighting local talent. SASG is a place where artists, producers, small labels and other music entrepreneurs can work collaboratively and grow.